Midwest family-man and producer, Indigo Child, releases his long-awaited EP Dark Sector. It starts off at 70 BPMs and gradually rises to 83 BPMs which give the entire EP a very nice flow and direction. Indigo Child classifies Dark Sector as a blend between his signature deep dubstep and drumstep.

Its been two months since his last release, Choked Up, which was released through Subworld Audio. Since then he’s been raising two boys out of his Kentucky home. A family man at heart, Indigo Child tells us, “It can be hard producing music while fathering two boys but as soon as they pass out I’m sitting down and writing.” 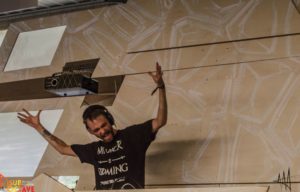 When I spoke with Indigo Child I asked him what the story was behind Dark Sector and what it meant to him. His answer is something every individual can relate to.

“I was personally going through a lot of dark things internally and was dealing with my own depression. I was watching the news a lot and was inspired by all these negative things going on. With the pipeline and our current situation with our own government watching as we continue to destroy ourselves. I had this thought. What happens when we destroy earth and where would we go if we could leave. And i had this idea of the “Dark Sector”. Inevitably it was based around the idea that the destruction of this world was imminent. Dark Sector was the place that the survivors would go and try to restart. Clouded was about the thinking and judgment that caused the inevitable destruction. Paper for me was symbolic to the greed and selfishness i was seeing.”

You can check out this meaningful EP out here as below as well as iTunes, Beatport, and Amazon. Take a journey through Indigo Child’s mind and see if you yourself is worthy of starting anew in the Dark Sector.